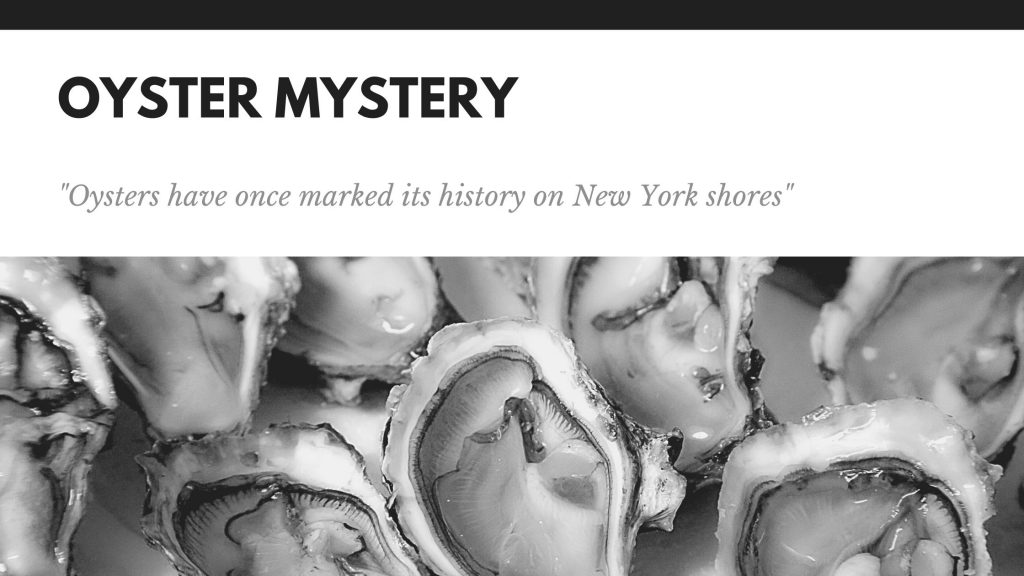 Have you wondered what happened after the English found piles of oyster beds on the east coast of New York? Have you wondered how the New York Culture would be different if small creatures like oysters are plentiful in their area? Oysters could be your favorite shelled seafood or your most hated seafood. Nonetheless, there’s a fascinating, the little shell creatures have once marked its history on New York shores.
—————————————————————————————
Finding Oysters
At the beginning of the 17th century, Henry Hudson sailed along the Hudson River. As tiny waves crash onto the mud banks of Manhattan (the one with vibrant green trees and fertilized soil.), oyster shells open and close as the oysters collect food from the water. According to atlasobscura.com, it stated, “When Henry Hudson arrived in 1609, there were some 350 square miles of oyster reefs in the waters around what is today the New York metro area, containing nearly half of the world’s oyster population.” For those who love eating oysters, Manhattan would have been your oyster heaven. The humongous amount of oyster became a key factor later on in history when English and other immigrants settled in the five boroughs. However, the numbers of oysters did not stay high for long.
—————————————————————————————
Find the oyster bay
At the time, the United States was the daughter country of the British Empire. A tremendous amount of immigrants came to the United States to seek or new safe and life. The people realized that the colossal amount of oysters could bring them fortunes. Oysters are simple to raise on a farm due to the small amount of space required to give each oyster. Besides, oysters are filter feeders that eat plants like algae and plankton in the water. Having both people liking to eat oysters and the use of filtering water, oysters became a valuable resource to Americans seeking easy money. Oysters became a popular food in England. In fact, according to tripsavvy.com, they stated, “According to Natural England, in 1864, more than 700 million oysters were eaten in London.” Oysters connected a trading route between the US and other countries who are looking for more savory food options to sell to consumers.
—————————————————————————————
Shell Craft
As people consume more oysters throughout the 19th century, oyster shells became a devastating problem. Oyster shells piled up on side roads created a foul dead fish smell. Thus, the city came up with the idea of using oyster shells as road pavements. According to history.org, the people burnt oyster shells creating a limestone substance and then mixed with sand, water, and other things to create a somewhat durable sidewalk. The city eventually banned the oyster roads because of the continuous foul smell and non-durable.
—————————————————————————————
From Thousands to Few
The thriving economy from oysters didn’t last long. As the industrial revolution continues and develops in Manhattan, the polluted water and air made the oysters so toxic that they were no longer editable or mostly alive. Over fishing caused the oysters’ population to drop tremendously. As a result, the last oyster bed closed in 1927 due to foul water pollution. Today, making up only one percent of the oyster population, Long Island holds the only edible shellfish beds in the entire New York City oyster population.