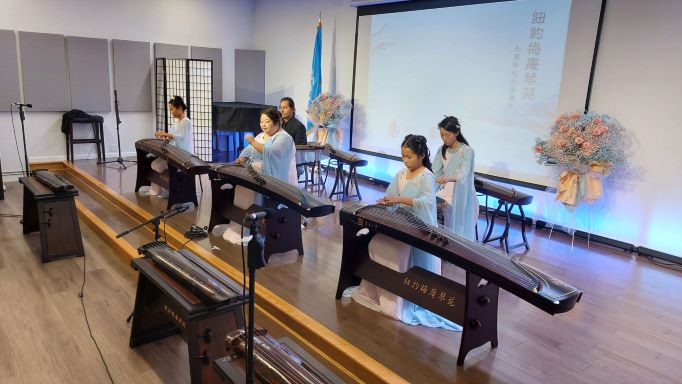 On the first Saturday of December, Glow Cultural Center, New York Guqin Center, and Hanfu NYC held the annual GCC Music Festival featuring Guqin, Guzheng and Hanfu from many different dynasties in Chinese history. This was the 9th Anniversary Concert for New York Guqin Center, and founder Judy Shih-Hua Yeh performed two songs along with her students, gracing the audience with a masterful combination of tremolo and arpeggio techniques within the moving melodies.

Hanfu NYC prepared an in-depth introduction of the 24 solar terms that explained why the terms came to be and how to interpret the calendar directions left to us by our ancestors. There was also an interactive exercise where the audience members tried to guess which Hanfu belonged to which dynasty, and a detailed discussion of how traditional Han clothing changed over the course of history, adding elements from different cultures as nations and races mingled through trade and conquest.

Though the program only lasted two hours, participants were able to enjoy an elegant winter afternoon immersed in Chinese traditional music & historical ambience. We hope everyone who attended learned something new about Asian culture, and look forward to hosting similar events to continue GCC’s mission of bringing accessible cultural content to the wider public.